This digest covers some of the major observations in this update, specifically those that discuss preparedness, response and recovery examples from around the world that suggests options for action after a marine oil spill has happened.

From a Clear Seas perspective, preventing oil spills from happening at all is always the best course of action. However, if they do occur, it is critical that the most efficient mitigation systems are in place. To that end the examples presented are worthy of serious consideration by provincial and federal decision makers. 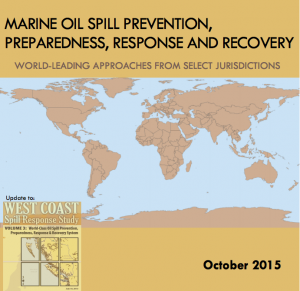 This updated Volume links the elements in the three volume 2013 report to the BC government’s aspiration for world-leading standards by presenting specific examples from select jurisdictions around the world that the governments of BC and Canada may look to as model approaches.

Oil spill preparedness, response, and recovery measures provide some level of mitigation to reduce the adverse impacts from an oil spill. In Volume 3 of the 2013 study, five common elements of world-class system were identified:

Most coastal nations have adopted some form of a national contingency plan for oil spill response, and many countries have additional layers of planning at the regional, state/provincial, port or local levels.

(1) The Australian National Plan provides the foundation for oil spill contingency and emergency response planning at all levels. It is rooted in an evaluation and capability assessment that establishes a risk-based prevention and response system. National capacity includes emergency tow vessels to prevent incidents and strategically positioned, stocked, and maintained equipment caches to respond to oil spills using either mechanical response or dispersants. Over 20 years of annual reporting on National Plan activities creates accountability and transparency.

Based on the Australian plan, British Columbia and Canada could:

In some industries, regulatory compliance can be evaluated using metrics, representative of actual performance. However, in the case of oil spill response planning, the metrics or standards used to determine oil spill readiness are by necessity hypothetical and reliant on numerous assumptions. What response planning standards can do is establish target thresholds for preparedness that can be measured and compared and thus provide an indicator of response capabilities.

(2) US Pacific states’ oil spill response planning standards are a case in point inasmuch as they compel operators to ensure that they have sufficient capacity available in a given region to clean up a worst-case oil spill. Operators must describe their capability in government-reviewed contingency plans. State regulations encourage continuous improvements to response technologies and some require periodic formal assessment of best available technologies. The public has the opportunity to review and understand operator plans and compliance.

Based on the US example, BC and Canada could:

In most countries, mechanical recovery of oil spills using boom and skimmer is the preferred technique for responding to marine oil spills. There are alternative response technologies – such as the use of chemical dispersants or treating agents, or in-situ burning of oil on the water’s surface. These may be preferred in some situations.

(3) The United Kingdom (UK) Policy on Oil Spill Treating Agents provides an approach to alternative response technologies with a clear framework for decision-making regarding the use of certain approved chemicals to treat oil spills on water and on the shoreline. The UK also has operational and resource capacity in place to deploy dispersants within the window-of-opportunity while the oil is still dispersible.

Oil spill-treating agents (dispersants and other chemicals that may be applied to break up an oil slick) are a primary and preferred response option for offshore oil spills, provided that they are applied according to criteria established by the Marine Management Organization. The government’s policy toward the use of oil spill treating agents is clear and transparent. A decision-making flow chart is used to expedite decisions about when agents may be used, and response capacity includes both government and contractor resources. There is a framework for testing efficacy and toxicity, and only government-approved chemicals can be authorized for use. There is an expectation that port and operator oil spill contingency plans will establish criteria for deciding whether or not to use dispersants.

A BC model could include:

Geographic Response Plans (GRP) or Geographic Response Strategies (GRS) are location-specific strategies to protect vulnerable sites that are of particular ecologic or socioeconomic importance. GRP and GRS have been developed in many jurisdictions around the world. Some plans are developed by operators, some by response contractors, and others by government agencies.

GRS are developed through a consensus workgroup process that involves local stakeholders, natural resource agencies, and spill response experts. There are several opportunities for public review and comment on site selection and GRS tactical plans. Operators may reference GRS in their oil spill contingency plans to show how they will protect sensitive areas.

Considerations for modeling BC’s approach to geographic response planning, based on the Alaska example, include:

Local fishing vessels have been used to supplement marine oil spill response operations for decades in regions of North America, Europe, and Australia.

(5) By way of example, the Alyeska SERVS fishing vessel program in Prince William Sound, Alaska has created a network of trained, on-call fishing vessels and crew that can provide immediate first response to an oil spill as well as a broader network of vessels and crew to supplement ongoing cleanup operations. There are 400+ vessels in the program.

The program creates a community-based first-strike spill response capacity in the Prince William Sound region and is structured to ensure that a minimum number of vessels and crew are available on stand-by to respond to incidents at any time. Contracted vessels must meet minimum response times that range from 1 to 24 hours. Annual training that is regularly updated ensures that vessels and crews are capable of a range of spill response functions.

Considerations for BC and Canada include:

Oil spill impacts begin immediately and may endure for weeks, months, years, or decades. While some spill impacts may be obvious and relatively easy to quantify, such as reduced tourism business or a number of oiled seabirds, other impacts may be more ephemeral, such as the loss of access to a recreational area.

NRDA treats restoration and recovery as a separate but critical component of oil spill response and recovery. Its ultimate goal is restoration of injured resources and is entirely separate from punishing, fining, or correcting actions of the party responsible for a spill or incident. It is a well-defined process with people and plans in place for implementation prior to an oil spill so that all parties know what to expect. It can be implemented for an oil spill, substantial threat of an oil spill (such as a ship grounding), or other pollution event.

The responsibility to fund restoration and recovery is established in law. The process is intended to be cooperative where possible, but the authority of the trustee agencies responsible for protecting – or restoring – resources on behalf of the public is paramount. Other elements include: damage assessment and restoration and recovery planning begin immediately during spill response; recognition of a range of impacts to resources and their use; a framework for primary and compensatory restoration, depending on type and severity of impacts; and an opportunity for public input and comment.

For its part BC and Canada could consider: